In IMPAQT project, EGM has designed the Data Aggregator System (DAS), in charge of interfacing the sensors nodes (IADAS) deployed over the IMTA fishery sites (Ireland freshwater and coastal, Netherlands and Turkey) with the cloud platform. It matured over the project and is now included within the EGM portfolio as an edgeGateway. This gateway is versatile to adapt to on-site situations regarding Internet connectivity and energy availability. It is especially suited for low power consumption scenarios as well as unreliable connectivity.

EdgeGateway is a smart IoT gateway specifically designed for low power outdoor LoRaWAN private network deployments. Its modularity and customization options allow for flexibility when deploying a solution. With its industrial-grade components, it aims at achieving a high standard of reliability even in harsh environments such as marine conditions. 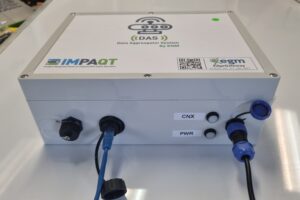 The edgeGateway provides many connectors and interfaces for users. These connectors can be used for debugging, interfacing with other subsystems, Internet connection and remote maintenance. The edgeGateway can interface external system through the USB connector, Ethernet connector. In addition, it embeds the EGM edgeSpot which provides almost unlimited connection capabilities for communication protocols like the RS485, RS232, UART, I2C and SPI through its 3 slots for daughter boards.

In IMPAQT, every site uses a custom connector to interface the subsystems to monitor the water and others. For example, in addition to the IADAS, the Edgegateway collects data from Bioceanor Aquabox, the Oxyguard Pacific or a Davis Vantage weather station. 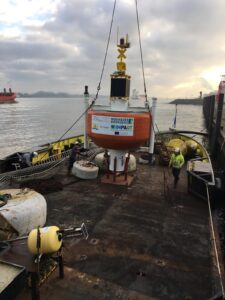 The research and development activities conducted within the project allow providing a robust solution that meets the exigence of a harsh environment like the oceans and the Aquaculture sites where the gateway must run in many days with limited sunlight or bad weather. The embedded edgeSpot keeps a record of the system clock (RTC) and it is an independent system power management. In addition, the edgeGateway can run autonomously thanks to its edge processing capabilities and manage data synchronization between the edge and the cloud. This allows reducing the power consumption and passing in mode offline if needed when the low power modes of LTE-M or NB-IoT are not enough. As a result, the EdgeGateway ensures a 2.8 to 3 W of power consumption, which is half of the power traditionally consumed by such gateways, allowing solar-powered deployments.

Thanks to its innovative software and hardware architecture and the integration of secured programs, the Edgegateway brings the best of Linux systems and open-source technologies and the optimization of the known LoRaWan gateways, using the same Software for easier and cheaper integration. The gateway provides high availability and performance levels that enable flexible and scalable deployments. Besides, the edgeGateway meets the standard requirements using a secured OS system and TLS encrypted communications.

With a strong and robust design, the EdgeGateway has been engineered to support the deployment of smart projects, combining the simplicity of outdoor installation, its industrial-grade components, it aims at achieving a high standard of reliability and operational excellence.